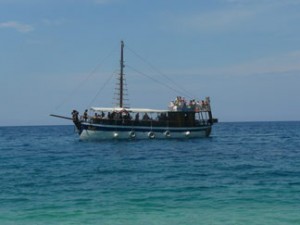 We took a trip from Cres island (in Croatia) to a secluded beach, with some underwater caves you can swim in.

We swam 30m down the side of a rocky outcrop of land, into what looked like a naturally formed underground carpark (if the ceiling was only half a metre up and the ground was water that is). Deeper in, it got darker, but there was a guy with a torch guiding us.

We got into a very dark big cave, which had a line of sunlight tinted blue at the far end, appearing to come from under the water.

There were maybe 30 people in here. Them the guide took us into a smaller cave. It was pretty cramped and to get there we had to squeeze through a narrow gap just wider than your head.

Once you were in there, you had to either grab a handhold on the rocks of the ceiling or just tread water to stay afloat.

We went back into the big cave, and our eyes had by now adjusted to the dark so you could see everything, just from the light coming in from under the water. There were bats on the ceiling.

Then we left through the entrance tunnel, where the water appeared to glow neon blue due to the adjustment of our eyes. It looked artificial like blue gatorade. That colour was something you can’t really take a picture of, you have to experience it.

Then we had barbecued sardines on the boat, which was delicious, with homemade wine (it had all that sediment in the bottom), but it was really light and chilled. yum.