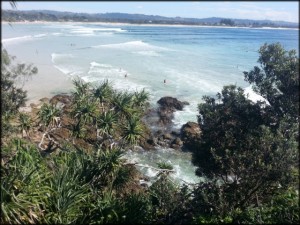 today we decided to head to byron bay, which is a beach town with a beautiful beach attached to it.

We got there and found some breakfast. I had an egg white omelet with spinach,  cheese mushrooms and caramelised onions, which treated a lot less healthy than it sounded, to my delight!  Then we set off along the beach.

It was quite busy,  there were a lot of surfers in the water. finally I got to see what all the fuss about surfing was about. Our 2 hour lesson didn’t really cover what the end goal of learning to surf rewarded you with. it looked much more fun than what we were getting up to, and a lot more difficult.

We headed further, to the “eastern most point of Australia” where I became entranced by the waves rolling in and crashing against rocks, marveling at their raw power and feeling very small. The others had to wrench me away so we could get back in time for the barbecue at our host’s house back up in gold coast.