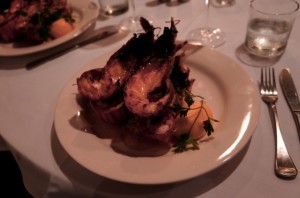 today we went surfing for the first time since we were kids. We went to a part of town called surfer's paradise and got some lessons. The sea was toasty and it was unpleasant to get out.

Then we back to the house to bake a cake in the shape of a monkey for the christening party tomorrow and then went out for dinner at a posh seafood restaurant. All five of us ordered barbecued moreton bay bugs which are like mini lobsters or giant languistines depending on your disposition. delicious.