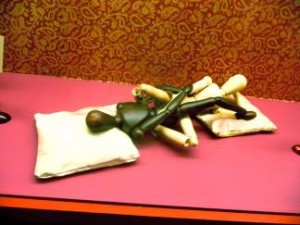 Hello, from Amsterdam (actually I just got back yesterday). Went over there for the weekend with Arthur, Clarisse and a few of their friends.

We got the red-eye coach, so we were all pretty tired throughout the whole thing, but it was cool. We hired some bikes. Art and Clarisse got a tandem, which they tried to buy at the end to take it back, but the rental place was having none of it!

The best bit by far was the Nemo Museum, (my pictures). It’s like the fun part of the London science museum but much bigger, and you don’t really learn anything, you just play with stuff. They also had a tiny display of skelingtons and fetuses (check the piccos).

We went to a few coffee shops, although I’ve never really got the hang of smoking weed. I was going to say we had a few nice meals, but that would be a lie. One night I had chips and nachos, the next a burger king and a kebab for breakfast. Nice work. I’m still regretting it.

We went to the red light district. I’d been here with my parents(!) when I was 14, and we didn’t see much, but that’s because it kicks off later in the evening. There were ho’s in the windows, but what shocked me was the fact that most of them looked so young.

Then back on the coach at 10pm, arrive in Victoria at 10am. Nice. Ugh.

I found out that the place I’d been hounding in Japan for a job weren’t taking anyone on, then I got offered to do a PhD in Sydney, which would last 3 years. I agreed because I wanted to escape, to turn over a new leaf as it were. However, I hadn’t completely sold myself on doing it. I planned on just doing it until I got bored then I’d bail out. That’s not a great attitude.

I didn’t actually want to do it, someone else wanted me to do it, so I said no. I really hope I don’t regret it.

Then a while ago, I went to this reunion of my school. I went because there were supposed to be free burgers, and also for semi-voyeuristic reasons. Everyone (almost without exceptions) was a banker. That’s everyone that went. A lot of people didn’t turn up. Mostly the people I wanted to see. Oh well.

Doing jury service made me realize how many stupid people there are here in London. Not the victims and the defendants, but the jury. The jury are selected 100% at random. The only thing that everyone has in common is that they’re registered to vote. Other than that they’re a perfect cross section of London.

Then last week was working on this “holographic interactive installation” for Future Cinema‘s Watchmen preview. The party was awesome. There were strippers, roller girls, fire hydrants a 50’s diner, a tank, hobos, american police cars, fake news reporters, oh and a preview of a film that wasn’t out yet. Gallows played too.

Off to Amsterdam next weekend.