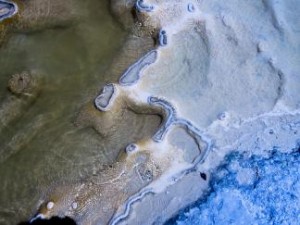 On with the story! From Mexico City we traveled to Oaxaca city which is the capital of the Oaxaca region of Mexico. We got a night bus. Not any old night bus, but a super luxury first class night bus. The chairs were about twice as wide as an airplane economy seat, and you can LIE DOWN(!) in it. Pretty damned awesome!!! (and incredibly cheap!) The roads were a bit windy, so it was hard to sleep, but we just lay there in such decadent library. Oh, megabus would you please take a leaf out of their book?

In Oaxaca, (pronounced Wahaka) we went to a market, had some traditional food: tamales and this weird ricey hot chocolate, while some guys played a marimba type thing. I also bought about half a kilo of beef jerky for like 50p or something, and devoured it at an alarming rate. I didn’t let myself buy any more.

The next day, we took a trip up a mountain to a spring, it was like a natural swimming pool up there, with an incredible view, practically all to ourselves. Then loads of people turned up so we left.

To get there we got a bus then a “collectivo” which was a sort of truck with a wendy house on the back that you get in, it was a bit like being in the army, but bumpier. Some locals jumped on the back for a free ride and stared at us a bit.

The next day, we went to some mountain villages. We met the mayor of one of the towns, he invited us in to the town hall, which was just a room with pictures of other mayors. He was very proud of it. He asked us all to write in his visitors book (I guess, to prove that people actually go there), I wrote something about the nice ducks that they had.

Then we walked into this old woman’s house and demanded that she make us lunch, or that’s how it appeared to me, I didn’t understand what was going on, the others just spoke spanish at her and we got our mexican pizza things – tlayudas.

After that we went to another village and went on some natural sight seeing tour, but there was no tour guide, so the tourism office put us in a car with this 14 year old who was supposed to show us stuff.

We had a wander in some caves with water in it, and he offered to take us through the dark cave river to the other side, but I didn’t want to get my shoes soaked, so we just went around to the other side, and jumped in the water there in our underwear. For about 3 seconds. It was freezing. Colder than freezing. My manhood became a smurfhood. That cold.