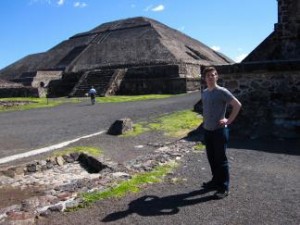 So, Mexico. I’ve actually been back for a while, but you know what I’m like.

Flight was pretty painless (and cheap: continental). Stayed in this weird hotel in Mexico City, faux marble entrance, it looked quite swish, then when we got to the upstairs where the rooms were, it was all bright orange and green walls, quite bizarre, but I liked it. The room had this weird swimming pool-type ceiling, as in, it looked like a very shallow upside down swimming pool.

Oh, I forgot to say, when I arrived, it was pissing it down. And freezing. Not what you’d like to expect having forked out £500 to escape London Winter.

Got to sample real Mexican food for the first time. Lots of eggs and cheese. Even cheese in soups. It’s also actually acceptable to put chilli sauce on anything (they had red sauce and green sauce). And lime. Lime on everything. Awesome!!!

So for the next few days we wandered round Mexico City, drinking cactus juice, went to some art galleries, was forced to go to some live music place with loads of old people dancing etc etc.

It was really European. It could almost have been Europe. I guess I didn’t really like that part of it, because I was trying to escape. One cool thing, though, was my first experience of Mexican seafood. And the first I heard of the myth of prawn beer. Prawn beer is basically when they put tomato juice, lime, salt and PRAWNS into a glass of beer and give it to you. I think you’re supposed to drink it.

I couldn’t find it anywhere, but there was a version called Michelada, which was just the beer, lime, salt and tomato juice. It was ok! I’m still here, aren’t I?

Eventually, the sun came out, and we went to see some pyramids (Teotihuacán). So I got burnt. Not terribly burnt, but enough to make me look like a tourist. That’s how I learnt the word for prawn (camarón). I was pretty pink.

The pyramids were ok, but I sometimes get a little disillusioned with ancient wonders (such as the previously mentioned terracotta warriors of Xian) It was nice to be in the sun.