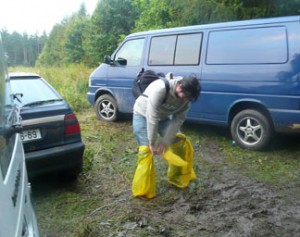 Down I Go went to the Czech Republic to play a festival called Mighty Sounds. It was a Ska-punk festival, but we were playing anyway. Basically everything that could go wrong, went wrong, well almost. We played OK.

We flew out at 3am on Saturday morning, to play at 11pm that night, then fly back at 11am the following morning, so not much time for sleep. After a nightmare of working out how to get to the airport and buying non-refundable tickets for all the options we opted to get a lift with the Display Team (they were playing as well, and we’re sharing their drummer at the moment)

Then we got there and the weather was shit, the organizers took us to the hotel for some kip, then they were 5 hours late in picking us up. We were starving at this point, only Alan had the foresight to get some money out, and we’d spent practically all of it on a packet of crisps and a bottle of pear juice each.

Then we got to the festival and it was mud hell. They gave us bin liners to tie around our shoes. It was like walking around in diarrhea. Then after Pete promised us unlimited sausages and beer, they gave us one meal ticket (for prison food) and 2 beer tickets. It couldn’t get any better.

We tried to look for a rope to make into nooses but there was nothing that looked adequate enough. Retrospectively speaking I could have used a guitar lead, but I wasn’t in the best state of mind at the time.

Then eventually we played, then some other band played then the Display Team played, and then we were off. Or no, we weren’t there was delays with the shuttle coaches, so we were waiting an hour and a half in the rain until 4am for a bus to take us to the hotel for an hours’ sleep before the plane. And of course the bus for the plane was hideously late so that we only just made it to the airport on time.