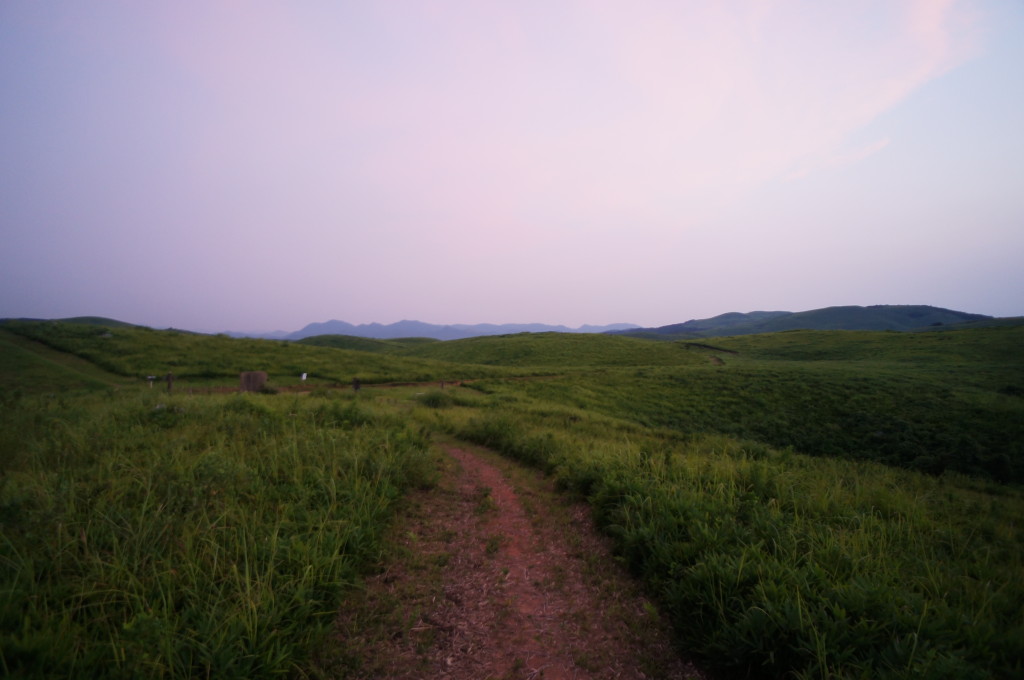 So what happened last night is when the sun went down, the mosquitos came out. I changed into my trousers and as I was changing my socks I got bitten on my feet. Then they were swarming round me. It was such a perfect spot to sleep, on the crest of a hill with a view for miles around, and I had to ruin it for myself by covering myself in DEET and going head-first into my bivvy bag. It was suffocatingly hot inside.

I could hear them swarming around me, searching for a gap, wish I could have recorded the sound, a microscopic cacophony of tiny high pitched whines, all at different pitches.

After about a minute and a half of the mozzer’s taunts, I decided to make a break for it. Luckily it was a full moon, but I was still a few miles away from anywhere. I stumbled in the dark back to the small town in search of a hotel or hostel. On the way I almost stepped on the most gigantic toad I’d ever seen. The grassland was screaming with the racket of millions of insects.

The town was completely dead, and no sign of any hotel, but I finally found someone to ask for directions, and he ended up driving me all the way with his mother in tow.  He was called Muraku-san.

The hotel was in the forst. Quite posh but sort of communist/70s looking, good communal baths, but had japanese kids in it diving in and using it like a swimming pool, not a peaceful relaxing retreat. Grump.

About half an hour after I got there, there was a knock at the door and a bell boy had brought me some food that Muraku-san had bought and delivered back to the hotel for me because he’d discovered that the hotel had stopped doing food. So nice of him! He’d gone before I got a chance to thank him. That’s Japan!

Today, I woke up super early and got on the bus then train to Iwakuni where there was supposed to be a nice traditional-style garden but gave myself blisters ontop of my new mosquito bites on my feet trying to walk there (it was quite far). Bought the biggest pair of sandals that I could find to stop the rubbing, but they were too small, so I hobbled for the rest of the day.

Got back on the train to Saijo which is a town east of Hiroshima known for its sake breweries. Did some tasting, and learnt about the brewing process. Seems quite labour intensive. Think I’ll stick to making beer, but the unpasturized sake was pretty delicious.

After that, I headed to Hiroshima, found my hostel and went for a wander. Found the main shopping street and had the best ramen ever! I practically licked the bowl clean. It was called Ichiran. It’s actually a chain. You have your own compartment, shut off from the other diners, so you can enjoy your noodles in peace. You also interact with the restaurant through a hatch.

After that, I went to the memorial with all the cranes, and the famous blown out atomic bomb dome, then went to bed.