yesterday we went to the great barrier reef. It was quite expensive but the main thing to do in the part of Australia we were in and quite revered by anyone who mentioned it.

We got a speed boat early in the morning to a part of it known as the outer reef, and stopped at 3 different places where we could jump out and snorkel. It was other-worldly. For a start the coral is alien enough to me in all its luminous hues and bizarre shapes. Secondly, the fact that you’re floating around, weightlessly among fish who don’t just whiz off at the slightest glimpse of you.

The fish were pretty spectacular, remarkable mostly for their colours. Didn’t see any sharks or turtles. I really got the hang of repressurizing myself in order to dive deeper in between breaths so I could get a deep as 10m without my brain imploding through my ears. The fact that I could go so deep made it doubly surreal. an experience totally unnatural for humans.

After that we went a modern Australian dinner in cairns that looked very exciting with emu, croc and kangaroo, but just didn’t really taste of much.

Today we flew to Brisbane for our connecting flight to kuala lumpur. We had must of the day in Brisbane so we had a wander round, had some Japanese food which is plentiful and cheap, went to the main at gallery and then back to the airport. 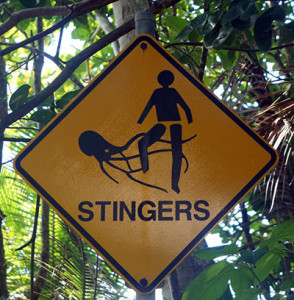 today we decided to head to byron bay, which is a beach town with a beautiful beach attached to it.

We got there and found some breakfast. I had an egg white omelet with spinach,  cheese mushrooms and caramelised onions, which treated a lot less healthy than it sounded, to my delight!  Then we set off along the beach.

It was quite busy,  there were a lot of surfers in the water. finally I got to see what all the fuss about surfing was about. Our 2 hour lesson didn’t really cover what the end goal of learning to surf rewarded you with. it looked much more fun than what we were getting up to, and a lot more difficult.

We headed further, to the “eastern most point of Australia” where I became entranced by the waves rolling in and crashing against rocks, marveling at their raw power and feeling very small. The others had to wrench me away so we could get back in time for the barbecue at our host’s house back up in gold coast.

yesterday was the christening. There was a little bit of panic with the ozzie grandparents of the baby who were hosting the party. We went to a posh boys boarding school Chapel to have the actual christening. It pissed it down all day pretty much. party was ok. We went for a walk afterwards then had sushi and a family argument for dinner!

today we hired a car and went to currumbin wildlife sanctury with Annette’s toddler neice. finally,  I thought,  I would get to see some kangaroos bouncing around,  but was very disappointed to find that they were just lying around,  dozing, surrounded by food.  It was as if they were all hung over. You could feed them but they just weren’t that interested. They were quite funny though, and I did see one of them do one bounce.

There were a bunch of other things like tree kangaroos, who seemed quite depressed. it was incredible though to see these rather large creatures precariously sat ontop of delicate palm trees, taking a nap.

After that we had an amazing lunch of barramundi and chips at a fish and chip shop in Burleigh Head, then off to springbrook national park to see some nature. This consisted of driving down a narrow Road for a mile or so, then getting our and taking in the view from a “lookout” then getting back in the car to reach the next one.

one such lookout was called “best of all” lookout. We got there,  and what we saw instead of the stunning valley we knew to be there,  was a dense covering of cloud. We did find another good lookout into the Valley though,  from which we could see 5 or 6 different waterfalls which kept me happy.